War was far from us, we were in Jounieh, killing was very far...down in Beirut Center...22 Km away!
Two worlds apart. 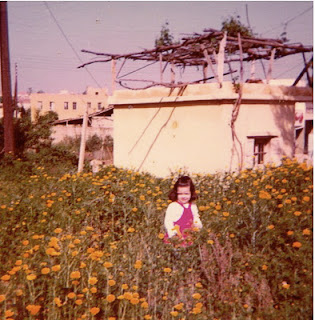 My daily life was still the same, if it wasn't for this ugly voice on the radio. I kept going to untie Badiaa's house behind the shop, play, eat, nap, and get lots of cuddles, stories and laughs. And when I wasn't behind the shop, fun followed me home. I was the only child in the building, and somehow, the center of attraction. Met a lot of love and care. I had no brothers and sisters, no dad, but a lot of love from neighbors, friends, teachers, nuns at school and strangers. I was in a warm nest. Mom was considered a stranger to take care of, but I was one of them! After all, I was born here, and was growing up a little every day.

Mom kept her snack for a while. Then one day, she came home and we never stepped into our shop again.

"War" wasn't a common word in the early years of Lebanese wars. It was sometimes called "Ahdess" or "events", sometimes, ""Harb El Aswaq" or "war of the markets", referring to Beirut Down Town battles. In fact, many years of bloodshed later, Lebanese war never carried one name, it has location names, or goal titles, such as: