Before having the chance to see the horrific broken Down Town of Beirut, I had to live another strong moment. My first funeral.
In Lebanon, it is a moment you never forget. An experience .
When the dead is young, the funeral becomes a macabre dance, a wedding, with rice and petals, screams and sad songs, drums and trumpets. The coffin swings and turns in public places, and the departed is for the last time, dancing without expressions.

The funeral I wasn’t invited to, was our young neighbor, Zouzou.
My memories of him before he died are vague, but full of fear. He used to scare me. He had a poker face. No expressions. No smiles. No words. He was rarely in the neighborhood. I loved his other family members, but not him.

I didn’t know where he used to go for long periods of time, until the day I heard screams.
He was killed.
He was a martyr. Shot in the heart of the battle, Down Town Beirut, in what was called: Harb el Aswaq or Battle of the Markets.

Quickly, our neighborhood became very busy. Waves of people, all in black, white ribbons on the street, on the balconies, sad faces, no laughs.
All houses were open to receive visitors. Every woman became a coffee maker. And a traffic of small traditional cups next to the coffee pots started.

I was confined in our house. No way I could go to Zouzou’s living room. “The body is on a bed in the middle of the room! Not a scene for kids.”
I didn’t get the “body” idea. But was okay not to go in, since Zouzou scares me.

Few hours later, the streets were filled with black dressed people, my mom took me up, to stay with two young girls (teenagers) living on the first floor. Directives were clear: "Take good care of Tanya girls, stay inside, don’t go to the balcony.”

We did right the opposite.

When the band started playing, with drums and trumpets, we ran outside all excited. But we quickly noticed we shouldn’t dance. Everybody was head down, sad or crying.
Suddenly we heard women lamentations. A group of “professional crying women” (called Naddabah in Arabic), paid for the occasion, came out. They used to come to funerals with the responsibility to repeat unbelievably moving sentences while crying, to help create the mood... (This tradition almost disappeared now).

Then, the real screaming and crying started. The family came out, with Zouzou sleeping on a tiny bed, his open coffin. We had the same reaction at the same time, the girls and I. We stepped back. Then, we knelt and grabbed the banister to watch without being seen. 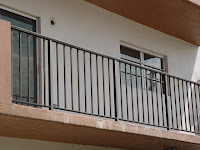 The procession was right below us. The rice was showered from other balconies, the petals too. Then a series of barbaric gunshots started filling the air and nearly muted the music and the paid crying ladies.
We got scared, but curiosity took over, and we stayed. At a certain point, Zouzou was right below me, less than 3 meters away...and time stopped. He was asleep, waxy skin, no smile, like always, wearing white. But he had cotton in his nose and mouth...

I nearly fainted of fear, he was surely going to open his eyes and give me his weird look.

But he didn’t. This was the last time I saw him.
He became our street’s martyr, our tax of the war, he paid our due, he became a hero.
That was the official story. But everybody knew the real one, and kept the secret.
Who cares? He passed away, he became a hero, I saw him dead, and now I can live happily ever after without being afraid of him. Life goes on.
Posted by Tanya Awad Ghorra at 12:01 AM 0 comments

They say (a message of peace from the land of fire)

This was the song I wrote for the international non-violent day. We celebrated it at UNESCO Beirut.

The young people I work with in Melkart school were on stage singing peace and love. Sending a message of hope. A simple message but as strong as love. 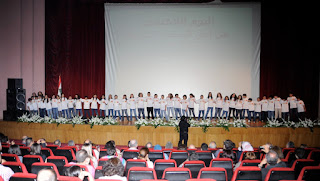 And true, it's all around
But it's also true, as you may know
We seek peace, and we know how
Life can be if we take time
And listen to the whispering voice
Of humanity and conscience
Just like the wind blows
When sun shines after the rain 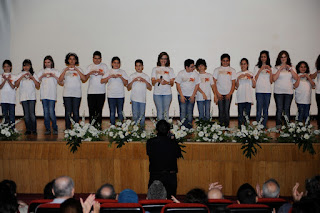 True, Nonviolence is here
True, it speaks very clear
True, it is in the news
And true, it has achieved
But it's also true, as you may know
A lot is still yet to do
A whole lifetime is not enough
But listen to the whispering voice
Of humanity and conscience
Just like the wind blows
When sun shines after the rain...